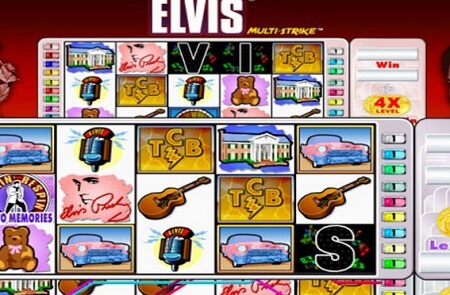 This is one of several games about the King of rock, Elvis Presley, to come out in recent years. Certainly it seems that Elvis has not left the building. His life continues to provide interest to many people, including the host of people who enjoy playing slot games. Some of the games are more fun than others, and this particular one seems to meet all the requirements that players want.

This game is like playing three games in one. There are the usual five reels, and three levels, from 20 to 60 pay lines. There are also two profitable bonus rounds, three feature rounds, and the chance to multiply the pay line wins for huge awards. During the play in the Elvis Multi-Strike slots games, the player is treated to the sights and sounds of Elvis as he watches the winnings increase

Wagering amounts in the Elvis Multi-Strike online slot game range from 1 to 5 credits on 60 pay lines, 20 pay lines on each set of reels, with a maximum award of 250,000. The line wins are multiplied by the number of credits bet on the winning lines, times the level multiplier. All wins pay left to right.

Awards Won in the Bonus Rounds

The Scatter award is any combination of four Photo Memories and Wild Bonus symbols in any position on the reel.  The wins then reward the player with three times the initiating level, and also whatever the multiplier allows.

The feature that gave its name to this slots game is the Elvis Multi-Strike feature. To activate this interesting feature the player has to play 41 pay lines, or even more. Then the player has to advance to a higher level with a Free Ride, or any win on the first or second level if the higher level is actually activated.  The Free Ride is also awarded whenever the player gets a combination of three Photo Memories and Rockin’ Re-spin Wild Bonus symbols in any position on the reels.

The Rockin’ re-spin feature in the Elvis Multi-Strike online slot game is activated when Photo Memories appear on reels 1 and 2.  If the Photo Memories symbol appears in any position on reels 1 and 2, and the Rockin’ Re-spin symbol appears in any position on reels 3, 4 or 5, the Photo Memories bonus will be activated. During this particular round, if the spin button is pressed an arrow starts spinning a record of Elvis songs, which is surrounded by a collection of Elvis photos.  As the feature progresses, additional arrows are added and the values of the photos increase. The feature comes to an end when the latest arrow points to a Collect symbol.

Another interesting or notable feature of the Elvis Multi-Strike game is the Fan-o-meter bonus round. Three of these symbols on a pay line trigger this bonus. The player picks one of five televisions which display concert footage of Elvis performing. The Fan-o-meter needle will move to indicate how strong the response of the audience is to the concert.

The interesting feature is that the louder the cheers, the higher the needle goes, the higher will be the value of the payout. The player will be awarded an Encore. This feature will enable the player to pick another song, for additional rewards.

There are certainly lots of surprises in the Elvis Multi-Strike slots game.