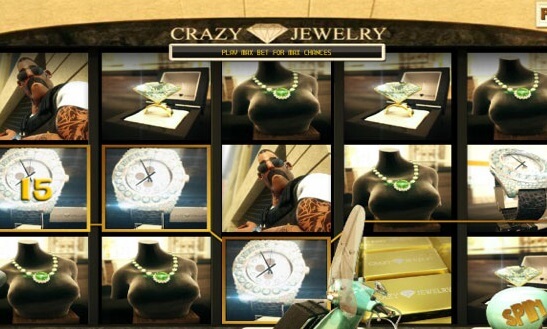 Crazy Jewellery slot is a 3D slot from well known developer Blue Gem Software. This particular game has a number of special features as well as a standing jackpot. Crazy Jewellery slot has twenty optional paylines which come with a very large wagering margin that will appeal to players of all budgets. Each line can be played for as little as 0.01 coins, which means that Crazy Jewellery slot is a penny slot. High rollers are catered for as well with up to five being able to be bet per line. This equals a maximum bet of 100 coins per spin.

Crazy Jewellery slot is a highly animated slot like some pokies available at gamblingonline.net.nz. Every symbol has its own little animation when it forms a part of a winning combination. The security guard character that lurks to the left of the reels animates constantly as well, chiming in on your progress. The graphics in Crazy Jewellery slot are detailed and in 3D. They would not look out of place in a video game or an animated children’s movie. The slot is set on a street outside a jewellery store with cars and mopeds in the foreground and background. The buttons at the bottom of the screen have been incorporated into the scenery, each one forming a bag attached to the moped. The player info is laid out in an easy to understand way to the left of the buttons.

All of the symbols in Crazy Jewellery slot revolve around the story line. A thief has gotten into a jewellery store and replaced all the expensive gemstones with fake glass ones. The little old jeweller has to find out which ones are real and which ones are made of glass, with your help of course. A watch, a diamond and a necklace are the lowest paying symbols. Next in line are a pile of loose diamonds on a red cloth, gold bars and a safe door. The most lucrative symbol in Crazy Jewellery slot is the security guard who sports a rather fetching handlebar mustache and aviator sunglasses.

The wild symbol is a security camera. This symbol can only be found on reel three. This wild is an expanding wild meaning that if you do find it on reel three it will grow or expand to take over the whole reel.

Three or more crazy jeweller bonus symbols on any of the reels will trigger this round. The jeweller is also a scatter symbol, which will pay out scatter wins no matter where it is found on the reels. The bonus round takes place on a second screen, inside the jewellery shop. Here you see a tray of gems in front of you and a perplexed looking jeweller behind them. You have to help him work out which of the jewels are real and which are fake. To do this you select a gem, which will cause the man to hit it with a hammer. If it’s real, it won’t break. If it’s made of glass it will shatter. The game is quite complex and will continue until you either get three fake stones or four authentic stones of the same type. Each type of stone has a value, with diamonds being worth the most and rubies the least. Each authentic stone that you select will award you with a multiplier of up to 10x.