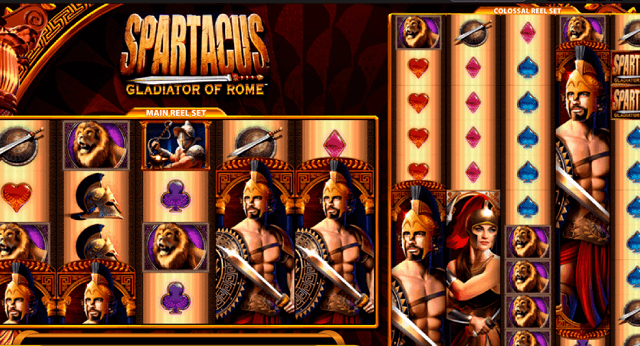 This online video slot is based on the Thracian gladiator, Spartacus. Not much is known about Spartacus except that he was apprehended and sold into slavery. He was one of the leaders of the 3rd Servile war. Many books have been written about him and he has been the inspiration for many films and TV series.

Spartacus is powered by Williams Interactive and the game takes place in a gladiator arena with the sounds of swords clashing and people shouting.  Spartacus has 2 sets of reels.

There are 5 reels on the left and 12 reels on the right with a total of 100 paylines.  The game features transferring wilds, free spins, scatters and stacked symbols.

Players can adjust the amount of active paylines in increments of 20 starting at 20 and going up to 100.  The bet button will select how much to bet on each set of reels staring at 0.01 and going up to a maximum of 5.00, which brings the maximum bet to 50.00.  The spin button will spin the reels to start the game or players can activate the autoplay feature that will spin the reels automatically.  Players can disable this option by clicking stop autoplay. The paytable button will bring up the symbol payouts, game information and all possible winning combinations.

Players can also try out Spartacus in demo mode.  This gives players access to all of the features of the game but without having to put down a deposit or bet any real cash.  Players are given demo credits to play with. Playing for free is a great option for players who would like to try out new casino games.

Spartacus offers a different looking reel set, which makes a change from the usual reels and paylines.  Players can enjoy an action packed slot with some good wins to be won.

The standard symbols include a gladiator, lion, shield and sword and a gladiator helmet.  There are playing card symbols, but unlike other slots these symbols are made up of a club, diamond, heart and spade. Also featured on the paytable are Spartacus and a female gladiator.

The wild symbol is the Spartacus logo and can substitute for all of the symbols except the feature symbol which is the Colosseum.  The scatter symbol will appear on reel 1, 3 and 5 on the smaller reels and on the bigger set on reels 1, 3 and 5 only.