The friendly woodlands take on a more sinister tone when night falls, particularly when viewed through the eyes of the animals that inhabit it, the most fearsome of which can be said to be the owl. Badgers frolic wildly; toadstools mysteriously crop up; and the very trees seem to become animated in the Owl Eyes video slots machine game from Next Generation Gaming –and, if players are able to penetrate the veil of mystery shrouding these woodlands they may well make off with a fortune. The game makes a variety of icon payouts available to players, as well as a host of free game options; a scatter and wild bonus; and an extra-stacked wild bonus feature to boot.

Luckily the availability of the game isn’t limited to woodland areas, and, wherever the internet connection is possible, Owl Eyes video slots can be played. It has been formatted for a number of different devices, including iPad; iPhone; desktop computers; MacBooks; smartphones; and tablets, allowing for players of many different platform preferences to join in the fun.

Players are welcomed into the woods of Owl Eyes with a truly beautiful graphical display: the woodlands are covered in the soft, night-time hues of blues and purples, and just the chirruping of crickets, and occasional owl hoot, accompanies play. There are flickering fireflies to accompany the player as he or she tries to wrest winning combinations from the reels given, and the simplicity and attention to detail of these seven reels makes for an entertaining slots game experience.

There are numbers and letters hidden in the Owl Eyes woodlands in the form of the playing card symbols of nine; ten; jack; queen; king and ace, and players who manage to land between three and five of these alongside one another are able to reap rewards that will multiply stakes by between five and 200 times.

Leaf symbols are able to deliver up to 500 times the ante, should players land five, and the same amount of toadstools will pay out 600 times whatever the player has bet. 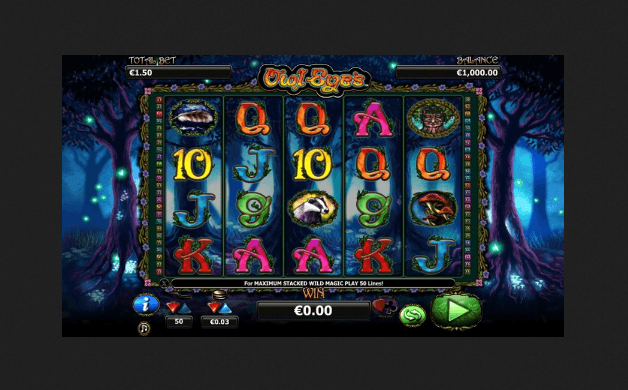 The badgers can deliver stake multiplications of as much as 800; and the newly-animated trees will increase this by 200, delivering a win of 1 000x on the bet the player has put in place.

The owls are able to appear on the second; third and fourth reels, and are the key to triggering the wild bonus for Owl Eyes video slots –they are also able to stand in for all the other symbols of the game, excepting the scatter moon. Extra stacked wilds are able to activate five free games, as will three of the moon icons, and scatter symbols also pay out five times the player’s stake should three appear; 20 times the bet if four show up; and 100 times the ante if five happen to land on the Owl Eyes reels.

The line options range from between one to 50 and the stake choices are similarly high, with betting options of between 0.01 and 2 on offer. In this way, Next Generation Gaming has been able to include both more conservative bettors and those who prefer letting more money work its magic on the paylines, and free play is widely provided for as well.